A while ago, a beautiful horn came into the workshop. The owner, proud as punch, announced that his horn had been “overhauled” by a friend who enjoys repairing and overhauling instruments in his free time. He hadn’t been charged for any labour, and was simply asked to pay his mate back for the parts used.

The owner of the horn stated that it didn’t play as well as he would like, and asked if I could please take a look at it to see if I could find what was wrong with it. He was convinced it would only be a small issue or two.

After careful inspection, it became very clear that this horn was rife with problems. The owner’s face went from a happy pink colour to a very concerned pale colour in a matter of minutes, as we discovered more and more issues with his instrument.

As I discussed this issue with some other professional repair technicians around the world, it has become quite obvious that more and more people work on instruments for fun. As such, there isn’t anything wrong with that. People work on cars, they work on lawn mowers, boats, you name it.

One of my colleagues referred me to an article he wrote a few years ago and he kindly let me repost it here. It outlines pretty much exactly what I am trying to say as diplomatically as possible here: “Hobbyists, Stop Misinforming People and Wasting Their Time”.

I hope you enjoy reading it.

Reblogged with permission of the owner, Carlo Cennamo from Cennamo Woodwinds. Original post at http://www.cennamowoodwinds.com/blog/november-02nd-2015

This 1948 10M came into my saxophone repair shop in Seattle and the owner is experiencing intonation issues and intermittent playability problems.
Although the horn was “overhauled”, it was overhauled by someone that made absolutely no attempt to do the job properly. But they did buy the most expensive pads on the market to do the job. Why? Presumably because it made the horn easier to sell. But so what? Not a single key on the horn was refit. Not only are the keys loose, not one rod fits inside its post correctly; there is concentric play inside every post. The first two photos below show the F key in the lower stack and you can see just how much slop is between it and the F# key next to it. Every single key on the horn is like that. It’s a mess, and it’s a shame.
So why does this matter? Do loose keys cause intonation issues? 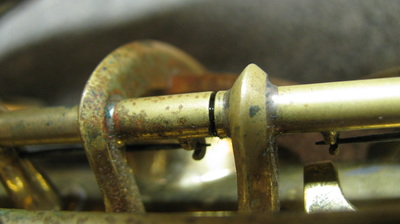 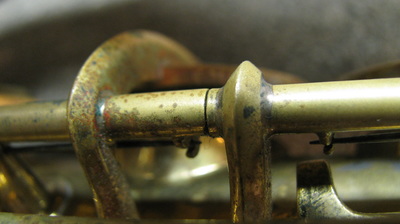 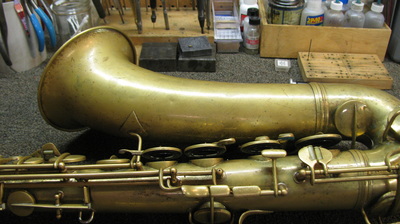 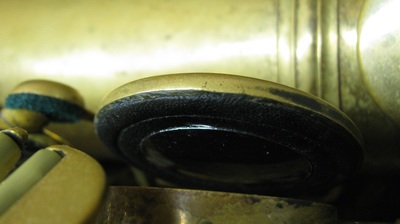 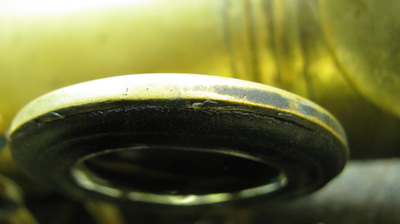 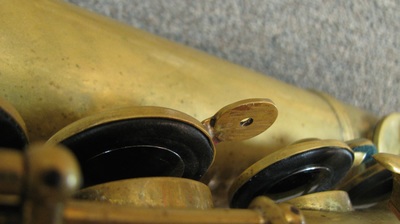 Not directly. But loose keys are at the root of the problem.
Loose keys wander all over the place. The concentric play on the rod causes key deflection, and they ruin properly seated pads by blurring an otherwise well-defined pad seat. And that causes both intonation and playability issues.
Know what else cause intonation issues? Improperly vented keys. The lower stack was significantly over-vented. That means the keys were too high. This can throw the octaves way off and playing in tune with an ensemble is virtually impossible.
Let’s look at the pad work. You want to show off your super expensive pads, right? Well, Roo pads have very thick skins and require a deeper seat than tanned kid leather. These pads had seats that were too shallow, and shallow seats in Roo pads never hold. And, due to their extra firm felt, if the tone holes are not level, you will never get a proper seat in a Roo pad. And none of the tone holes are level. None of them.
Look at the first two pictures below. They show the front and back of the G# tone hole respectively. See the light? There are low spots in the front and back. And guess what? There was a significant leak in the front of the G# pad. The third picture shows the low D tone hole. See that depression? The pad was, not surprisingly, leaking significantly. You’d need very good luck to seat a pad on that tone hole.
And the last picture shows a loose spring. It’s falling out of the post, and there were others like it. The only thing keeping it in place was the tension put on the spring by the cradle. It’s like a loose wood screw held in place because the canted angle won’t allow the screw to fall. And loose springs feel mushy, they don’t provide a positive snappy action. 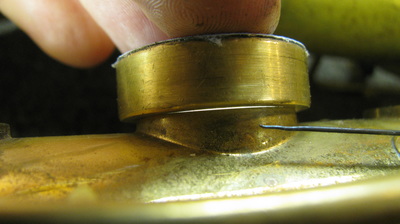 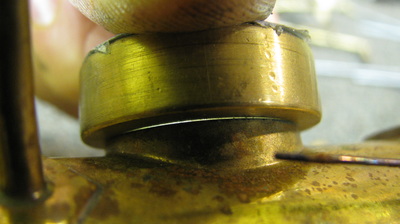 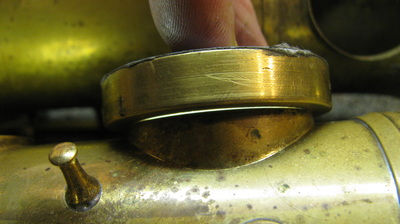 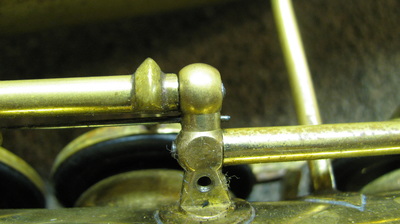 Let’s see what we have here: Sloppy unfit key work. Sloppy wobbling rods. Loose Springs. Out-of-level tone holes. Poorly seated pads. Improper venting. A horn that responds poorly, intonates unevenly, and has intermittent playability issues.
Why do I say hobbyist repair techs are misinforming people and wasting their time?
Because the unsuspecting people that buy horns like this think they have a horn that was “overhauled”, and they rightly assume the horn shouldn’t have too many issues. They also assume that any issues it does have won’t require extensive repair. Doing repairs like this lowers the bar on what passes for a proper overhaul and gives professional repair techs everywhere a bad reputation. And it leads many people to believe overhauls can be done cheaply, but it just wastes their money. And educating people why their horn is in need of such extensive repair without injuring their pride or bad mouthing another “repair tech” is a diplomatic art at which I have become very articulate.
There is no shortage of excuses for why corners are cut on jobs like this, and they include: insufficient compensation, lack of proper tooling, lack of education, lack of skill, lack of time. But none of that matters. This recently overhauled horn needs an overhaul and that is an inexcusable waste of time.
A new, full set of pads indicates this person intended to “overhaul” this horn, not just tune it up or whatever. Fine, do it to your own horn. Do not sell the horn and misinform people everywhere. If you do sell it, clearly stating what was not done would help saxophone enthusiasts everywhere.
Thank you.
By admin|2019-09-17T20:21:12+10:00September 17th, 2019|Articles|Comments Off on Reblog: “Dear Hobbyists, Please Stop Misinforming People and Wasting Their Time“